Home
Explanation
Acivities
For you & Us
Advertisement
Impressum
Email
Zugriffe: 7436

Even if homosexual are not killed "in Austria" now any more on grounds of her inclination, they are also put out even today discriminations.
However, there also are even today countries where one closes homosexual in the prison or kills even.

Because there is up to now no "real" memorial, I have created this "virtual" memorial.
There will soon be (it was announced before more than "THREE YEARS") a homo's memorial on the Morzinplatz. Hear in addition the admission from the Press-Conference on 15. June 2005.

I have provided this homepage after the best knowledge and conscience. Should mistakes occur me, I ask you to inform me about to it.
You can send me here an Email. I would be very grateful about every kind of wishes, critics or information.


At this site Symposium their are sound-recordings and a Word-Document taken by the Symposium to the memory of the homosexual victims of the Nazi regime.

On this site you can read closer explanations about my project. On Examples you can have a look like I fancy such a memorial. 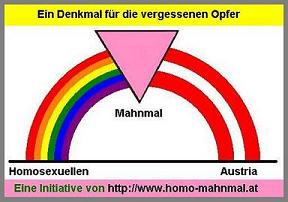 The Iraq war concerns to us everybody - also me. Therefore, I have resolved to furnish a link on the homepage http://www.iraqbodycount.org here. This body counter is a sign. A quiet, peaceful sign of the protest. A sign for the fact that during a war not only soldiers die, but also innocent civilians. If we have a look at this sign - and remind us.